Gaggen Path and the Poulton Stone

Retrace your footsteps a few paces and cross to the beginning of Duver Road. On your left is a sitting area under the eaves of Eddington Barn with a delightful map of St Helen’s 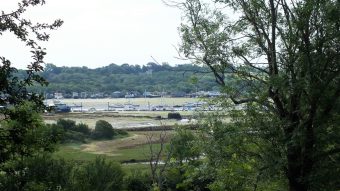 Continuing on Duver Road you will see another sitting area under a fine old oak tree. There are splendid views across to Bembridge. Continue on the footpath below the bench seats, known locally as The Gaggen. Half-way down, on your left, is The Poulton Stone.

Naval and merchant fleets would often anchor in the sheltered waters of St Helen’s Roads to take supplies on board. Press gangs would come ashore to try to boost crew numbers by “pressing” or kidnapping young men , “Get’em, gag ‘em!” – hence the name of the Gaggen or Gaggun Edge path at the edge of the Common. 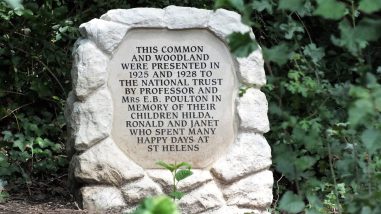 The memorial stone reads: “This common and woodland were presented in 1925 and 1928 to the National Trust by Professor and Mrs E.B. Poulton in memory of their children Hilda and Ronald and Janet who spent many happy hours at St Helen’s.”  The Poultons owned St Helen’s House on Duver Road just above this spot. Professor Poulton was a zoologist and his wife, neé Emily Palmer, was part of the Huntley and Palmer biscuits family. ‘Ronnie’ Poulton was an extravagantly gifted rugby player as centre threequarter who first came to prominence playing on the wing. He is one of

five in 1909, still the individual record for the fixture. Poulton was renowned for

his speed, his elusiveness and glamorous style of play. Teammate Dickie Lloyd,

same fascinating figure …” He won a total of seventeen caps for England,

scoring 28 points (comprised of eight tries and a drop goal), and had the

distinction of captaining his country through an unbeaten Five Nations

campaign in 1914, the last before the First World War began. Poulton was

Church there is a memorial plaque to him using his other name of Palmer.