Continue down the path and cross The Gaggen footbridge. Head left towards a pavilion, the old Clubhouse. 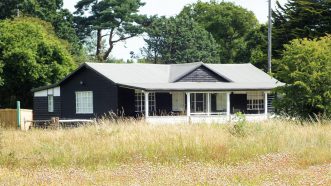 St Andrew's Rules
The Royal Isle of Wight Golf Club was founded in 1882 and was responsible for much of the development of the modern game of Golf, at one point challenging St Andrews as the source of the authoritative rules of the game and even forcing changes in some of the St Andrews rules. The St Helen’s Rules were in use from 1886-1890 when standardised St Andrew’s rules were adopted having incorporated some of the St Helen’s rules. 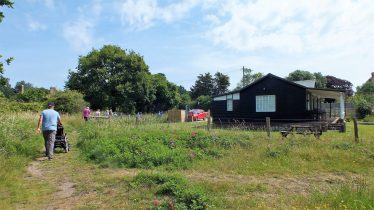 For Men Only
The course had nine holes and was for men only. The turf was imported from Cumbria, Bembridge Down and other locations on the Island which may explain some of the more unusual flora here today. Holidaymakers could reach Bembridge by the twice daily steamer which plied from Portsmouth to Ryde Pier, Seaview Pier and Bembridge Pier. A train also ran from Brading to Bembridge bringing people from other resorts such as Sandown and Shanklin. From Bembridge a ferry crossed to the Duver or Dover as it was then known.